So today is the first day of the second semester’s mid-terms and all the teachers went hiking.  Except me.

For some reason, this school doesn’t expect me to participate in any teacher group activities.  And I don’t bother, because as great as this assignment is – nobody at this school bothers to take ten seconds out to talk to me or include me in anything, so it’s a drag being with any of them.  As crappy an assignment as the ultra-conservative missionary school was, having a teacher there crush on me made for inclusion into every conversation (and drama) and I was expected to join in everything.

And while they are all complaining about having to do these “fun” activities, (another example of the idea of collective not being wonderful to all involved) I go home.  Only today I watched two movies while drinking makkolli and then, after opening my tin bank of 100 won coins with a can opener, hauling the 15 lbs of change down to the bank and netting 76,000 won, (people often comment on how I don’t take the time to unload my change when purchasing things, but saving change is just something I’ve always done as a welfare mom – it really comes in handy when, like this month, I accidentally sent too much to my American bank account)  I decided to take a stroll in my neighborhood and find some dinner out.

Here is the crappiest guard duty ever, standing by yourself in a glass box in the blazing sun all day.  There is a small military presence here, but I don’t know what they do and where they are located or why this one lone sentinel exists.

So this is fast-food, Korean style.  The ubiquitous kimbap shops all over Korea, from which foreigners eat half their meals at because it’s one of the few places that you are certain to not get turned away because you’re eating alone.  Plus it’s dirt cheap. But I took the photo of it just to show what hanguel overload can feel like when you’re illiterate and it takes you forever to sound out each word.

So this was my destination today, as I’ve been fascinated by the signage.  Most Korean restaurants specialize in one or two types of food, and it’s quite shocking to foreigners to have their sensibilities assaulted with, for example, a huge picture of a pig facing them when going to eat at a pork restaurant.  Koreans haven’t sanitized where their sources of food come from at all, which is a good thing.  But the specialization is kind of a bummer if you have a party of people who have specific tastes and could use a variety of foods on the menu.  But that’s not the group way here.  So fill up on banchan and pray there’s no animal products in the soup broth if you’re a vegetarian.

I’m not a vegetarian anymore (good thing, too, since vegetarian restaurants are hard to find in the country) and my choice today was:  shall I eat Billy or Donald today?

Been meaning to add this video, so this is as appropriate a time as any:

This blog very well may end soon, as my four year old Mac is about to kick the bucket…I’m constantly cleaning it up and rebooting to refresh the ram, but it sounds like death and the beach balls are making me want to get violent, since I’ve got so much to do and its all got to wait ’til the spinning stops…

Anyhow I’ve been meaning to try chevron forever and have determined that Billy tastes good.  It’s pretty lean, not too gamey, and holds up well to all those Korean spices.  It’s also supposed to help with virility (like I need that) and I hear it is used as a substitute when dog isn’t available…

Ordering went smoothly today, though  I’m just totally ashamed of myself, having been here a year and a half and I’m still at the level where I have to drag the owner outside and point to the picture of food I want.  This time I just pointed to the goat’s portrait and there weren’t a lot of choices, so there was no misunderstanding and no drama.  Thank God!

This was my other destination today, and why I grabbed the camera.  I’ve been wishing I had my camera with me every time I’ve passed this site, and I get here today and the sight is gone.  Bummer.  What it is, is a pumpkin patch.  Only all the pumpkins were growing ON the roof!  People will grow anything anywhere here. 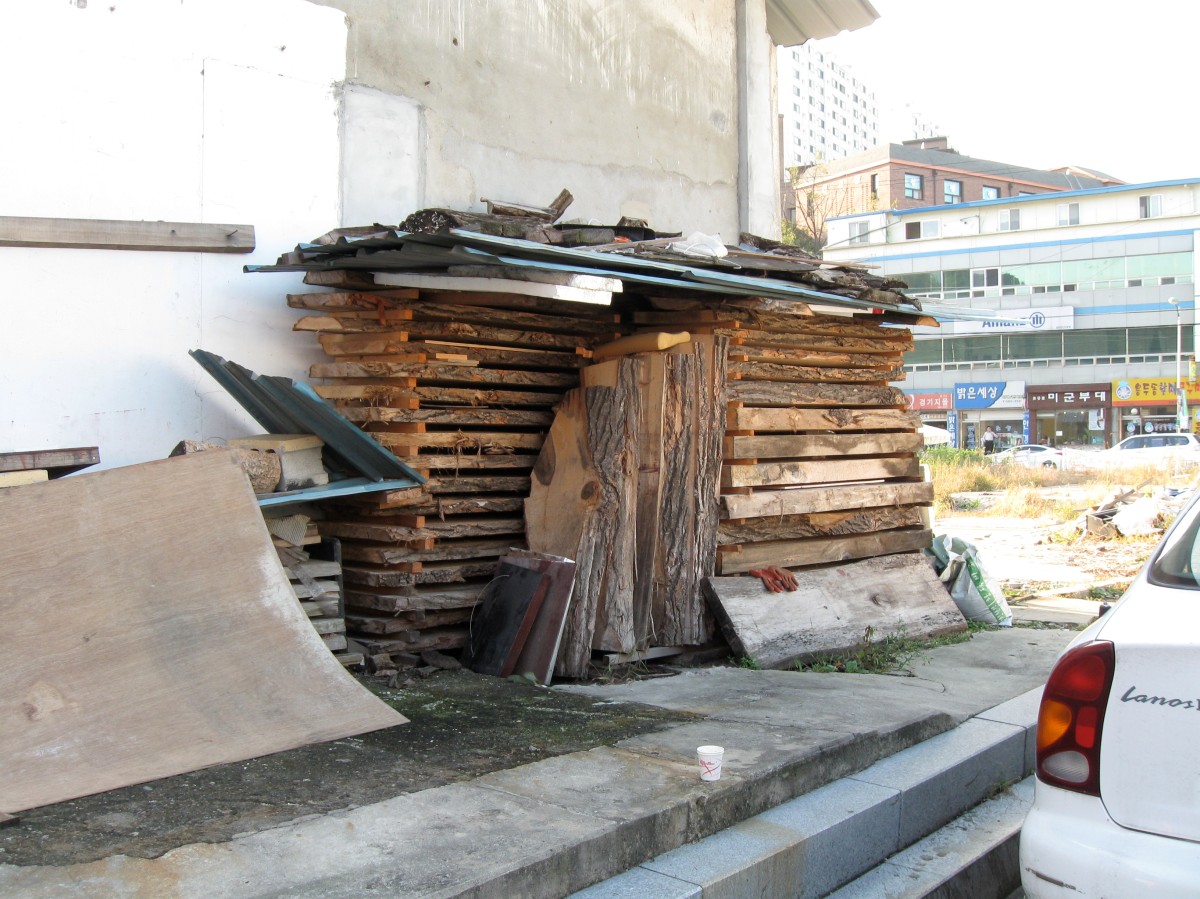 Now slabs of wood might not be something that excites you guys, but I got all happy when I saw it, as it’s an indication of hand craft.  Sure enough, when I rounded the corner I saw this:

And what this is in front of is a little sign shop, 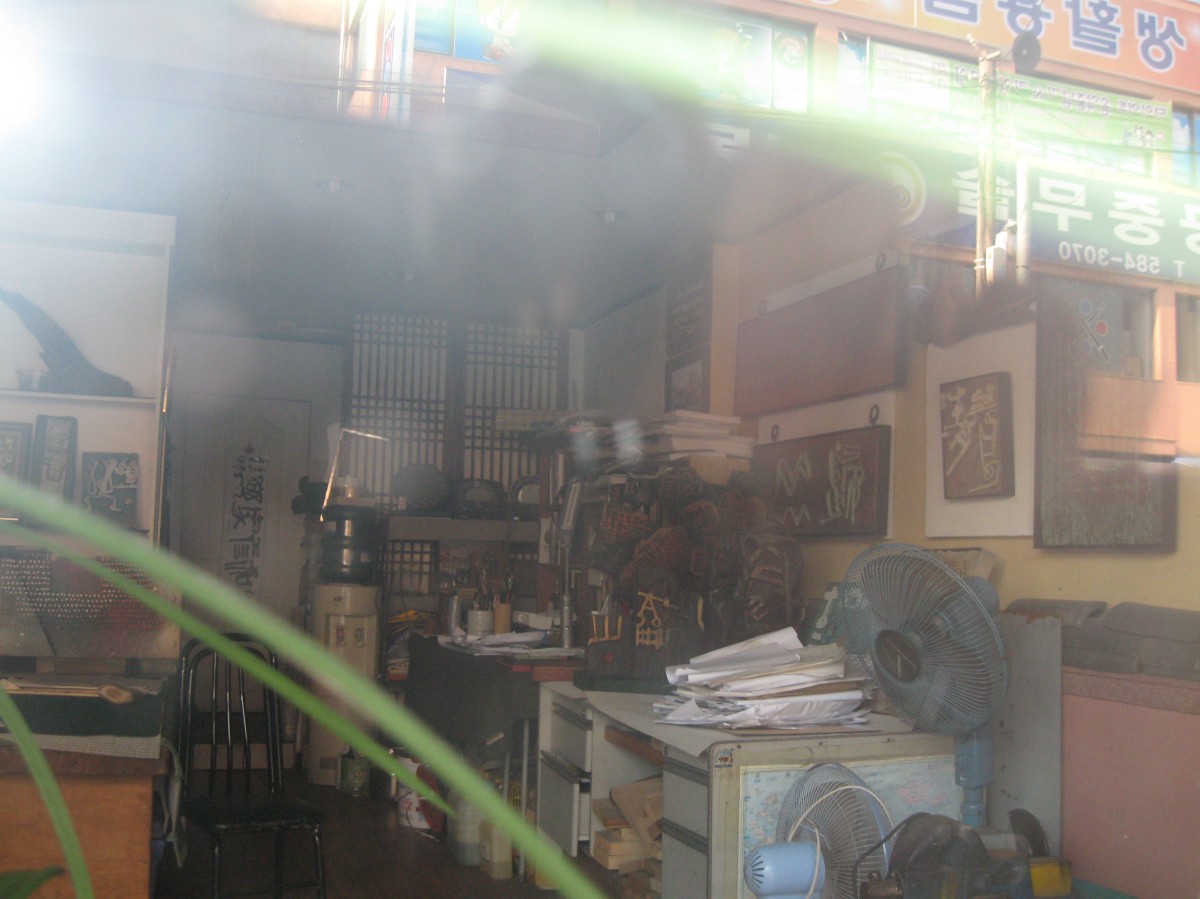 only these are hand carved calligraphic signs.  And, you can’t see it clearly in this photo, but there’s also some artwork mixing a kind of pop art with calligraphy and carving.  Very cool. 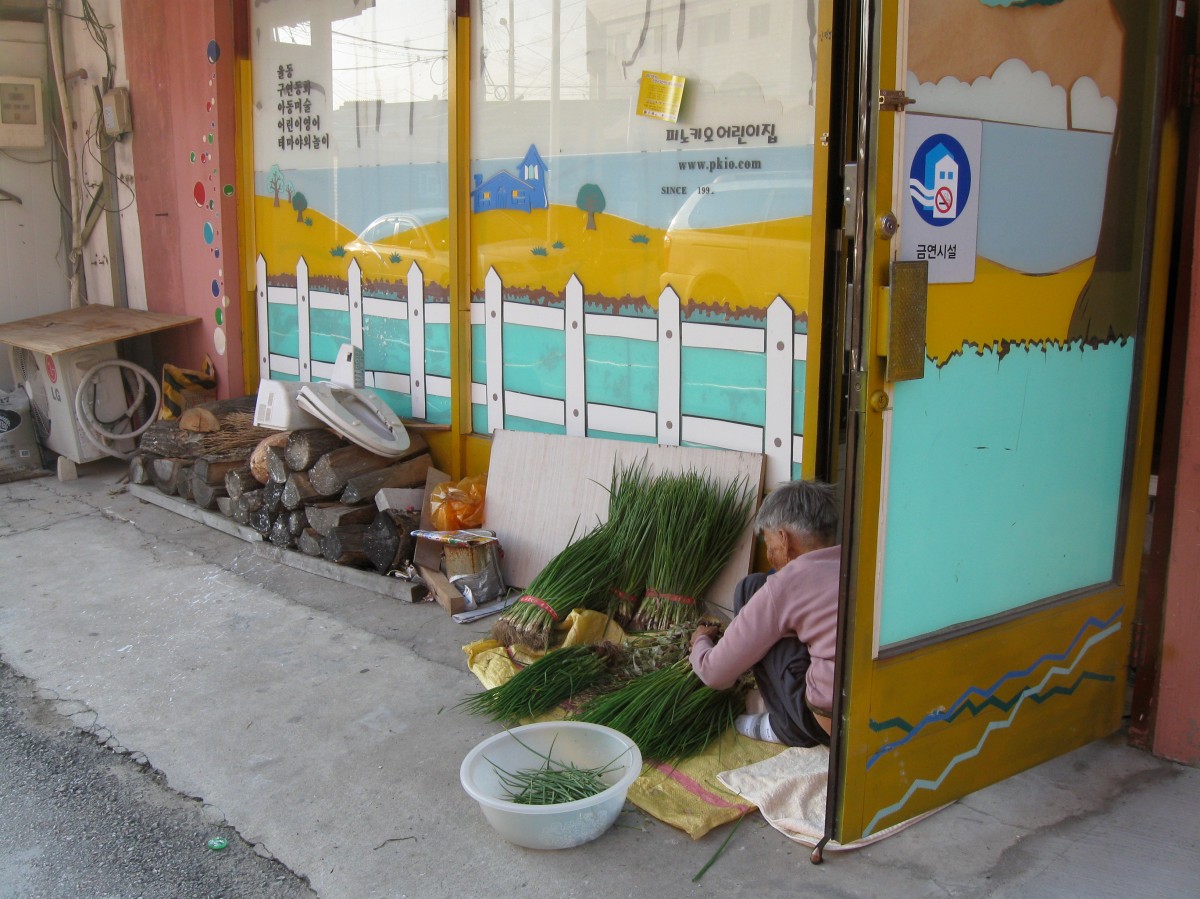 Next door a halmoni is doing food prep in a doorway.  Whenever business is slow, restaurant workers/owners can be seen cleaning, sorting, and preparing huge quantities of vegetables for banchan.  It’s usually a nice social activity – one that reminds me of the southern ladys I grew up with in my neighborhood, who would all snap beans together and gossip.  But this poor halmoni is doing it all by herself. 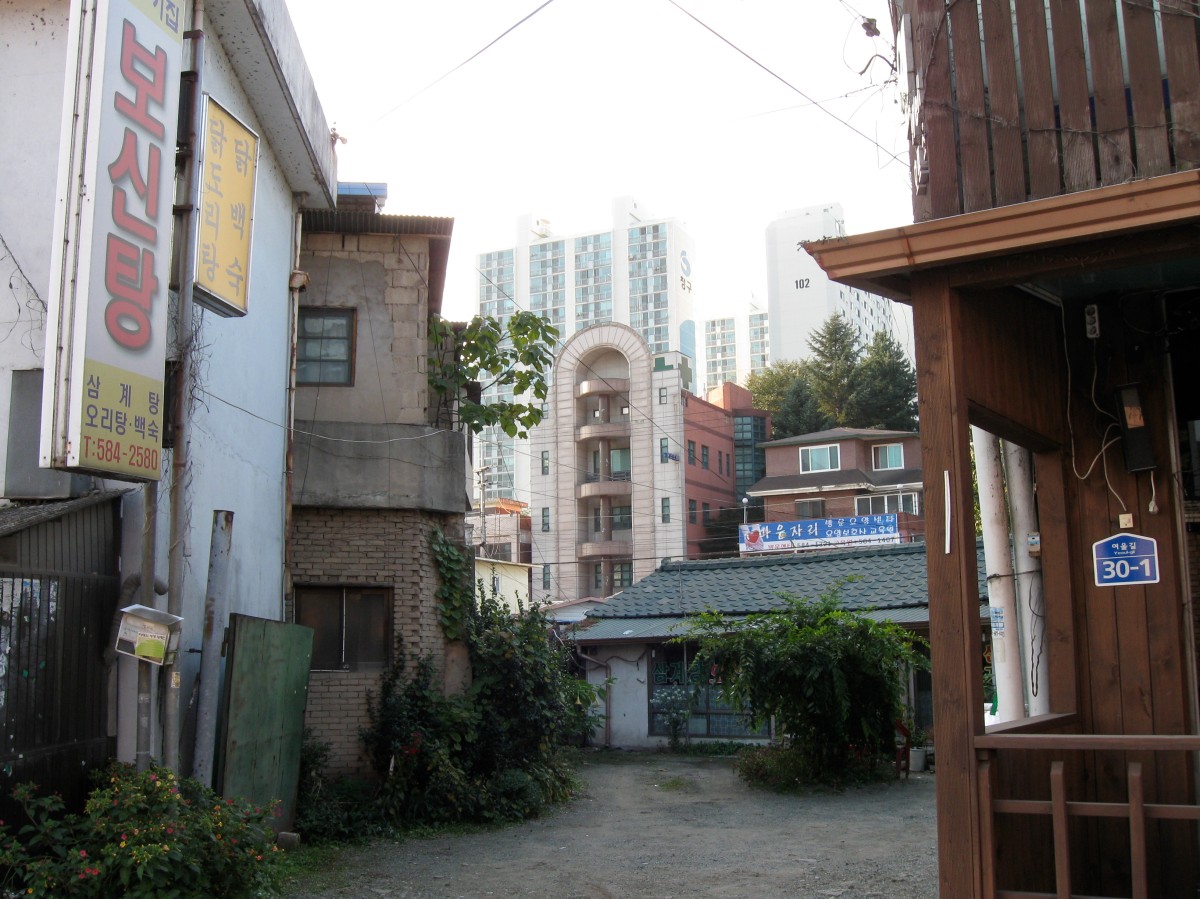 So we don’t have a lot of exotic fish and meat like Anyang did (though there is a place that has a fish truck (which looks like a pick-up truck with fitted tool boxes, only the they aren’t tool boxes but water-filled fish tanks) used to replenish the fresh fish swimming on display.  But here is our very own Boshintang restaurant.  Much nicer looking than the sad and dirty-looking ones in Seoul.  (Good god, this is turning into a 20 beachball post…grrr…)

There was one day I heard a REALLY horrific yelping of several mid-sized dogs coming from the general area, and I came over to investigate if they were slaughtering dogs right then and there.  But the yelping stopped by the time I got there.   I kind of am not against raising animals for meat, since a lot of animals we eat are very smart, sensitive, and could be pets.  But I also don’t want them to have lived in torture and neglect.  From the train I can see a dog farm on the way to Chuncheon, and it looks like pretty horrific conditions – raised metal pens too small for any exercise and probably very unsanitary.  And also the story is dog meat’s virility-producing powers is enhanced with adrenaline, so the dogs are beaten to death instead of killed quickly.  I guess the morbid part of me wanted to see if it was true or not. 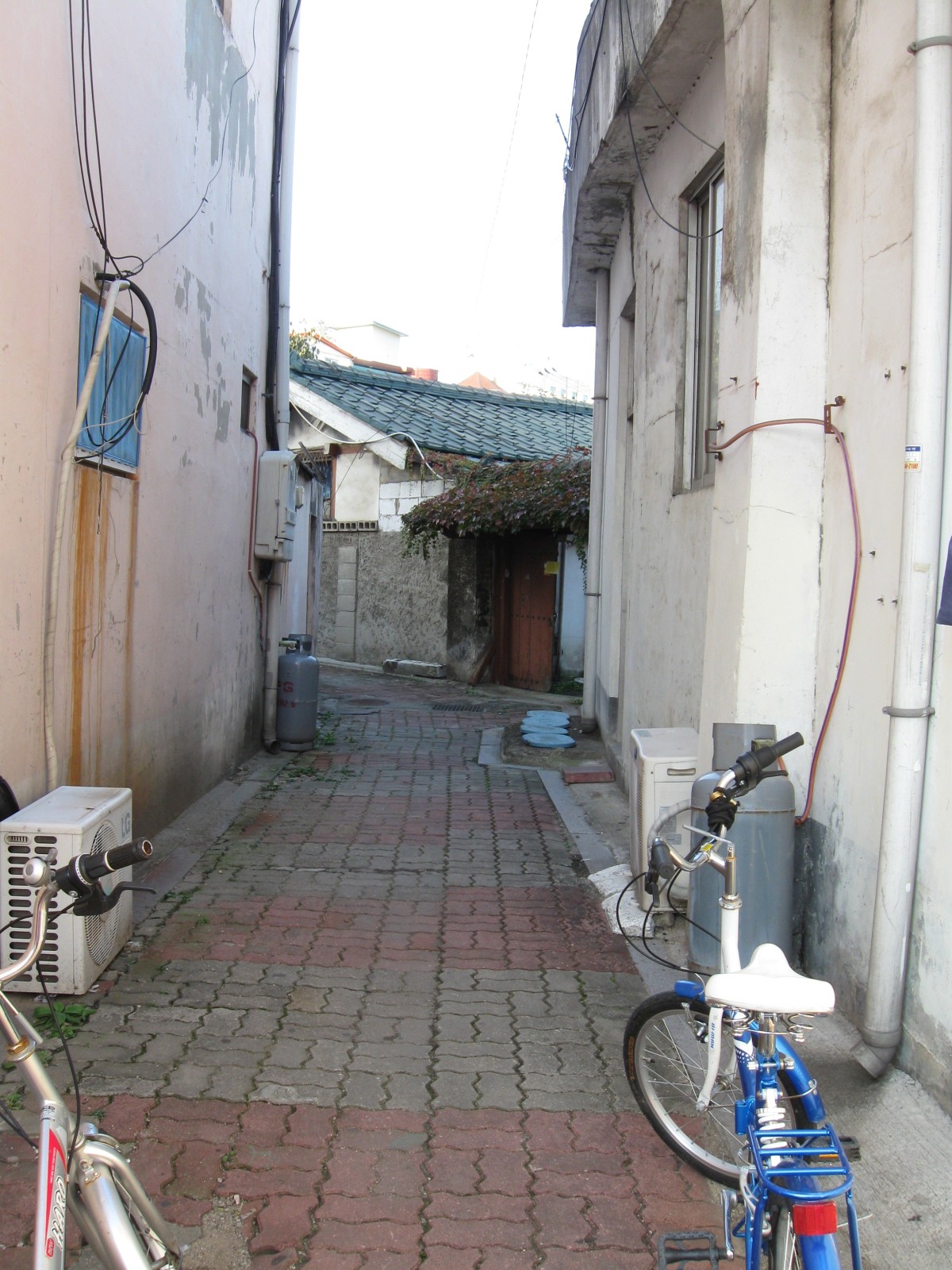 The dog restaurant is actually in a nice little traditional building.

with a garden out back and lots of kimchi and gochujang fermenting.  I don’t see this with most restaurants, who either skip the clay pots or purchase their gochujang.  No dog pens in sight, but then again I am too short to see over walls. 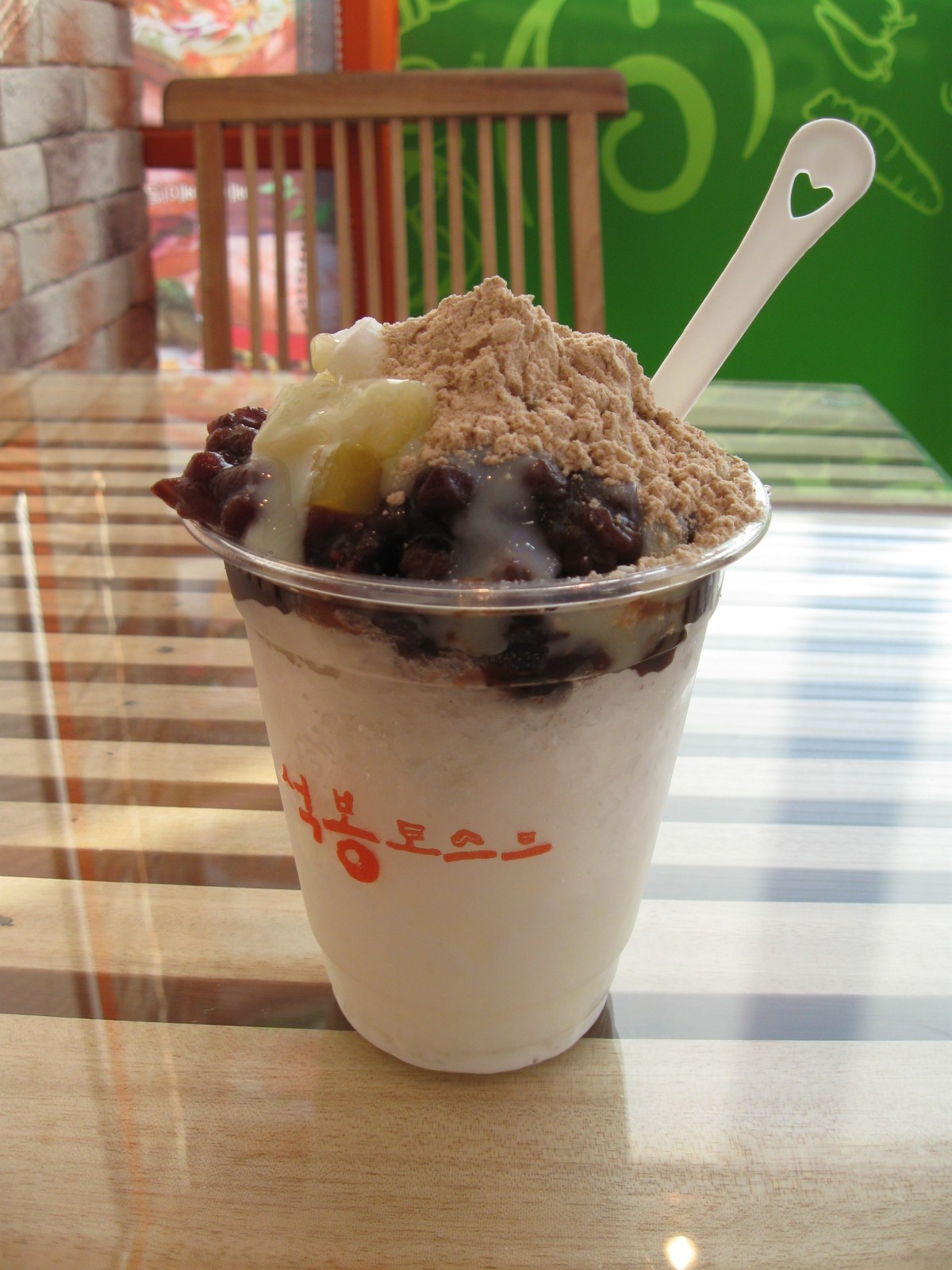 After dinner I stopped at the little coffee/donut/toast shop and ordered cup binsu for dessert.  Last year ice cream helped me survive the Korean summer.  This year, it was pat bingsu.  Which is, for those of you who don’t know, milk, sugar, shaved ice, sweet red beans, fruit, tiny rice cakes (which taste like marshmallows but a little chewier) and topped off with cereal powder.  And that cereal powder is really yummy.  Like everything Korean, you’re supposed to mix it up until it’s an ugly, unappetizing-looking mess and then eat it.  Which I HATE doing and I always get comments from Koreans for not doing so.  But unlike the rest of the Korean food, I actually do mix this up.  Only I wish the cereal came on the side, as it’s nice as a topping and not mixed in.  This set me back 1,500 won, or about a buck and a quarter.  Usually it’s sold by the bowl and at least two people should share one.  In Seoul you can get fancy fresh fruit ones with various combinations, such as with vanilla yogurt or green tea, etc.  But it could set you back about 7 bucks since fruit is one of the most expensive items in groceries. 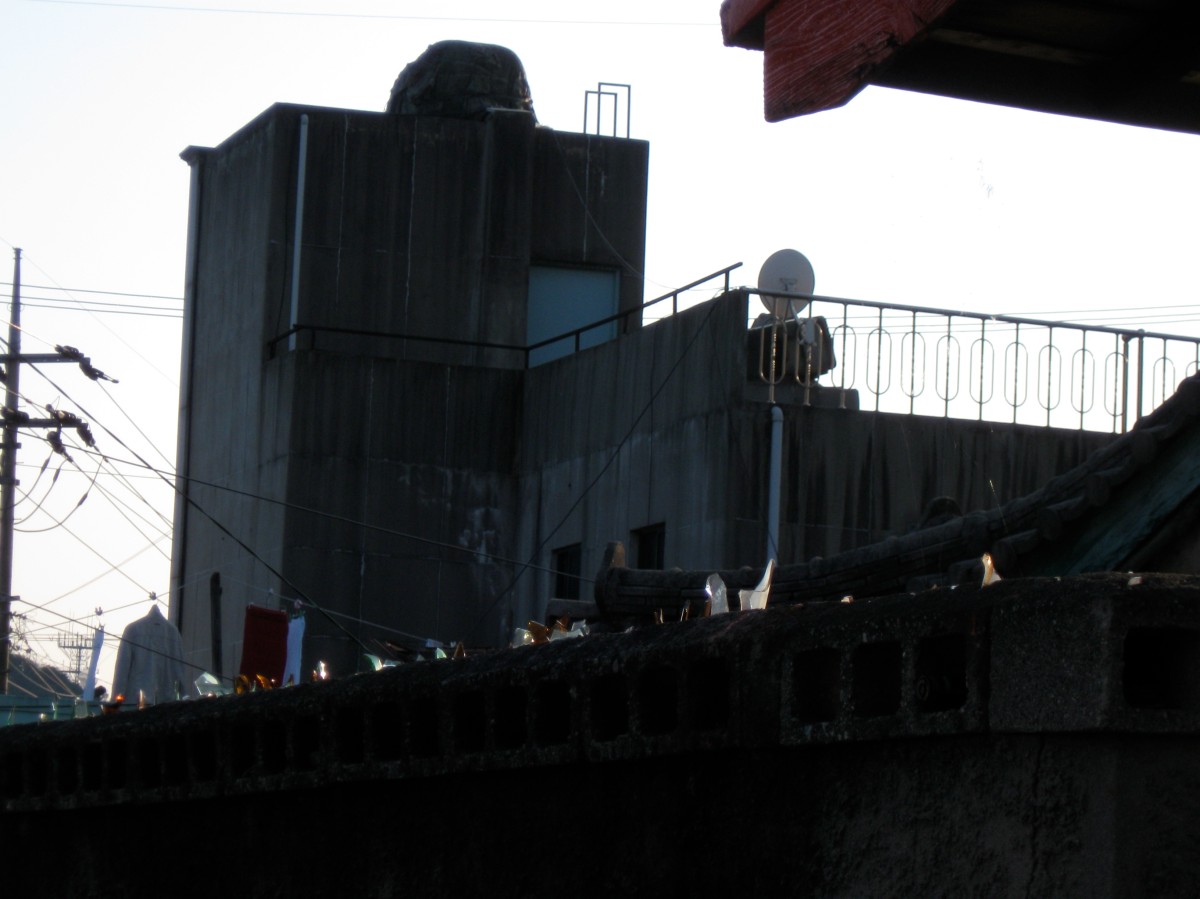 And finally, this is how a lot of Koreans treat the tops of their walls:  with jagged, broken bottles set in concrete.  A pretty effective no trespassing sign, I’d say.

3 thoughts on “dinner out”