The art installation we’ve been working on the past month is to illustrate the relationship between the number 1 and 200,000.  We lose sense of the impact of our actions when we allow ourselves to look at only the number right in front of us.  The reality is that 200,000 is almost unfathomable.  This is an attempt at showing what one looks like, 200,000 times.  One adoptee at a time, processed in the perpetual motion machine that is international adoption.

Something resembling the speech I gave (was told to, “make short your speech” midway through, so much got cut) at the National Assembly reception for the art installation:

Over three years ago I left a full time position for a part time job, so I could have the time to pursue creating art.  However, I failed.  I was confused:  I couldn’t express myself and had nothing to say.  But because of a personal crisis, instead of creating art, I ended up using all that time thinking about how I ended up where I was in my life.  For the first time ever, I began to think about international adoption and its impact on myself and everyone like me

Now that I’m in Korea, I find myself having too much to say. This piece is part of that.

Lately I’ve been thinking a lot about numbers. Well, actually I guess I’ve been thinking about numbers for all my life.  Mostly about one number, by itself, which I think is very common among adoptees, as they must by default bear their losses on their own when they are sent to foreign countries – where no one in their families can understand what it is to look different, or to be disconnected from those that look like them, or have to explain their existence, or try to reconcile why they were given up. One is the number we adoptees know too well.

When I read statistics about the number of social orphans (children with living parents but called orphans) created each year I get so sad.  When I am told to be happy because the numbers are decreasing, it doesn’t cheer me up because every social orphan created means one more child who must learn the meaning of one on a profound level.  Being exiled from your mother, your mother country, and your mother tongue is a loneliness I wouldn’t wish on my worst enemy.

These days, on average, approximately 3 children a day are sent out of Korea for adoption.  During the peak year of international adoptions, 1985, the average was more like 10.  They are both small numbers, yet they add up.  In Korea’s case, they add up to almost 200,000.  To me, 3 children a day is one lifetime + another lifetime + another lifetime.  3 is a huge number to me.

Here in Korea, I watch and listen and try to love this place.  I try to understand why my country threw me away, and I think I can and I think I forgive.  But I can’t understand why there are still 3 more children leaving every day. In a rich country without war or famine, there seems to be no valid reasons for creating orphans out of children with living parents. And as I learn about the excuses why 3 children continue to be thrown away every day, I sometimes think I am glad I was sent to America.  Because in America, I was able to be a single mother and go to college and have a career, because my government helps take care of its citizens, and I know that I would have struggled twice as hard and been cruelly judged here in Korea. Thank goodness my children, the love of my life; my reason for being, weren’t born in Korea, or someone might have forced me to send them away for adoption.

Penalizing women for indiscretions or unfortunate circumstances not only hurts the women and their children – but it also hurts Korea – in both potential citizen numbers and emotional trauma to society at large. These women are no disgrace to Korea:  KOREA’S NEGLECT OF THEM is the real disgrace, and the resulting expulsion of their children abroad makes Korea look like a third world charity case.  These women who choose to face their mistakes and bear their responsibilities indicate a true strength of character and maturity that is missing from the claims of many Koreans, typically their harshest critics.. (We have a word for people who try to hide in shame:  cowards.  Cowards are threatened by those with integrity). Any woman who chooses to prevail in this harsh climate so she may raise and nurture the flesh and blood she brought into the world is brave and deserves all our support.

So instead of penalizing these women, we need to assist them.  It is an investment in a stronger Korea, as every child lost to lack of social services equals a loss of human potential.  (Well, not to the other countries who receive them, but certainly a loss of human potential for Korea)  And the kind of potential that comes from difficult beginnings forges the strongest character, which is endangered in these soft times. That’s a huge loss for Korea if this country intends to persevere in the future.

As an ethnic Korean I want nothing more than to be proud of being Korean, but I can’t – because in the rest of the world Korea is still known as the best place to get unwanted babies, as a mean race that ostracizes and oppresses women, and as barbarians who eat their own pets. I believe Koreans want to be proud of Korea too, and so we should find real solutions which strengthen society instead of perpetuating practices which cause pain and literally diminish society.

Adoption has been the easiest solution for the government for the past 50+ years, but it does not solve social problems and, I would argue, cutting off children from their mothers is maiming Korean people and Korean society, because it forces all Koreans to live with the stain of being the kind of people who throw away their own children. Adoption has been the solution of choice because it’s easier to sign away one number with one signature than it is to acknowledge that each and every number is a human being that deserves a chance to live their lives as God and nature intended.

My prayer is that Korea comes to value all life and all families, both perfect and imperfect, so that no more one-way travel certificates out of Korea are forced upon little people. Let this congressional session show the world that Koreans are not barbarians but enlightened people, creating a civilized society that takes care of its own citizens

With only one month’s ’round the clock organization, adoptees visiting or living in Korea have united as a community to make this idea a reality, getting assistance from Korean nationals and unwed moms. 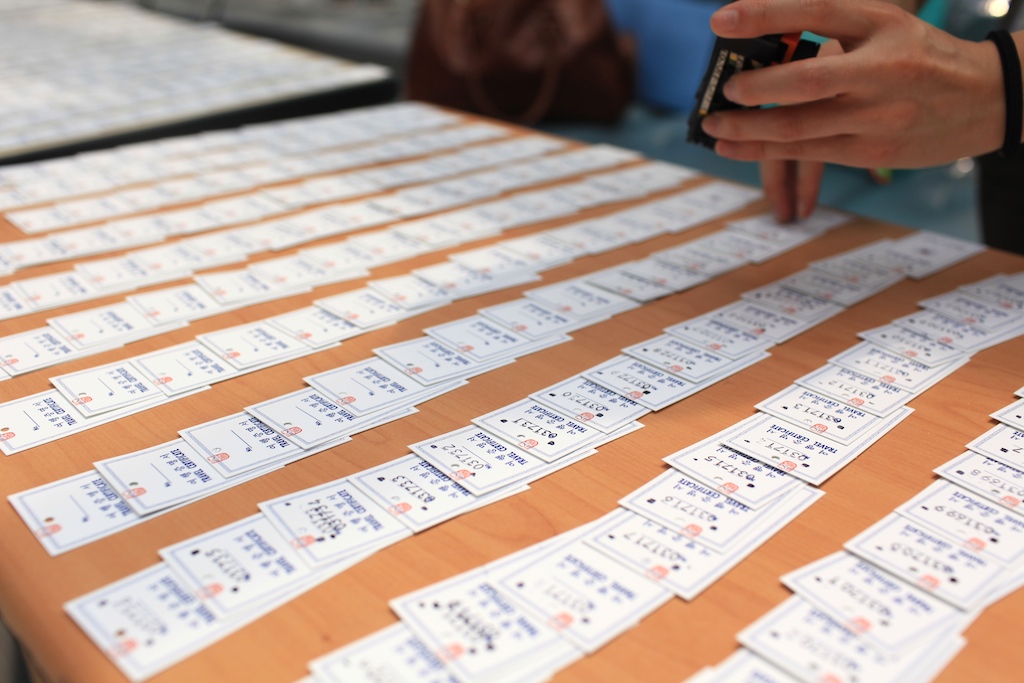 Over the course of two weeks, 90,000 price tags were stamped with an individual number representing one adoptee.

Over 75 referral photos were sent in from all over the world. 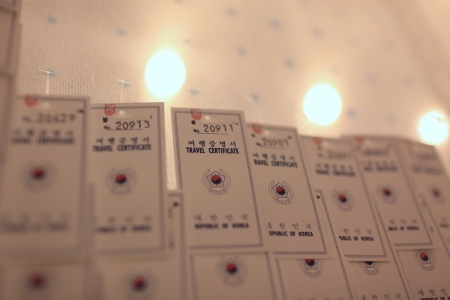 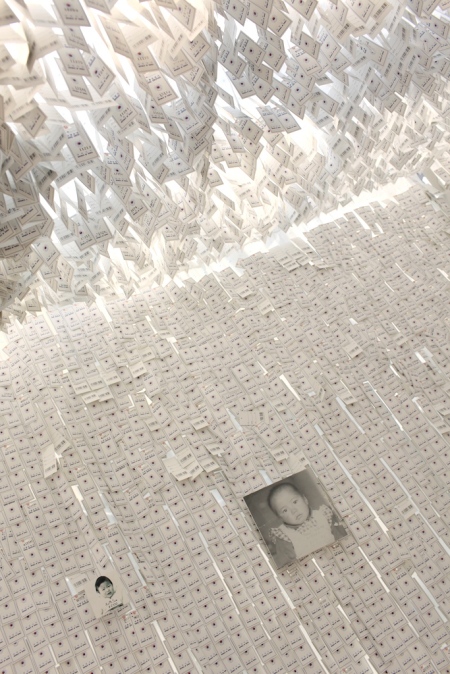 Over the course of the six day installation, approximately 60,000 tags were hung.

We fell far short of the 200,000 but had known all along that would be impossible.

I’m exhausted but it feels wonderful to do purposeful work.

33 thoughts on “A Collection of One”