Here’s me trying to get Momo to play with a small (about 6″ x 4″) box instead of attacking me.

She’s now no longer attacking me and loves her box…my arms are almost healed now!

I bought several toys for Momo, but of course they don’t get played with.  She prefers cigarette cellophane and tied up plastic strapping, and loves to fetch but hasn’t quite got the concept of bringing it back to me, so I have to steal it.

The experts say to play with your cat to wear them out, but I’ve found that just spins Momo up way too much, so I limit play to about once a day now.  They are right that having a toy in your pocket for the times she wants to gnaw on your wrists is a good strategy – you just stick that in her face and she forgets about your arms.

The BEST toy I’ve bought thus far has been this: 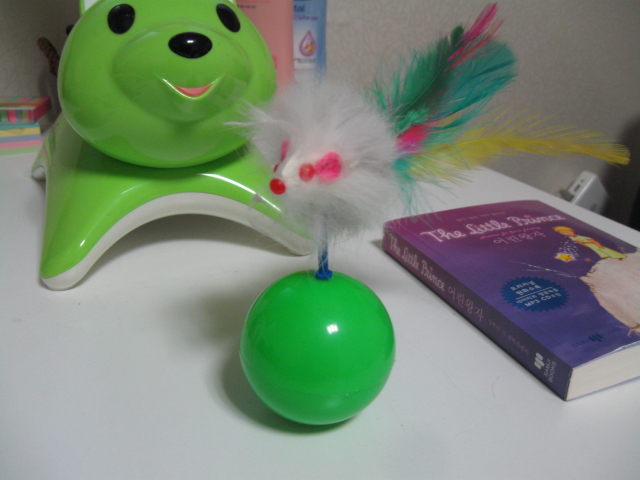 It’s basically made like one of the weebles – has an internal weight, so it keeps wobbling long after you’ve hit it and will always right itself.  It’s awesome because it keeps her interest.  So I put it on the end of the bed and when she wakes up wanting to hunt birds and rodents, she has that instead.  She can go totally insane on it by herself for about ten minutes, which is just long enough for her to forget about attacking  my ankles and my bedding. Cost?  $1.50.  I need to go buy a few more, as they get lost after rough play.

I have a little basket now that I throw all the toys in and make my rounds once a day.  She likes it because she can always find them, and she even likes to sleep in the basket, surrounded by the toys.