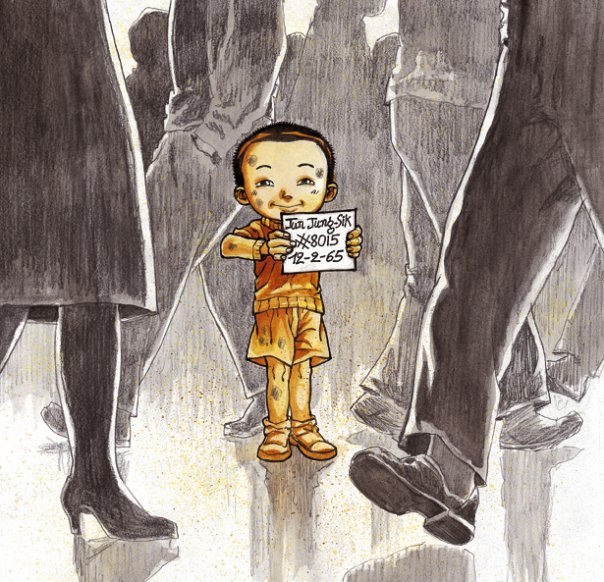 Sunday I met Miwha and her girls for lunch and then we went to see the Belgian cartoon artist Jung present his work at Koroot.  He and a documentary film crew are in Seoul filming the live action parts of this hybrid film.

As a mom of an animator, and as someone trained in architecture who’s lived the tedium of creating 3-d animations, witnessing Jung’s process was really really interesting!  How I wish David had been with me throughout the whole presentation.  Fortunately Jung will not be doing the production on this film, but communicating his vision for the 4 animation production houses (1 of them Korean)  has taken over a year, and the year prior to that was spent on a trailer and trying to find funding and distribution.

He walked us through many of the storyboards, showed us the test sequences for choosing whether or not to go 3-d or 2-d animation, showed us character profiles for all the main characters – which included front, back, side, and lip-sync formations, as well as all the dozens of support characters and their studies, and painstakingly detailed backgrounds of his home and scenes of Belgium.  Then, we got to see test animations of his own character (the film is autobiographical) rendered at different frames per second, and how he chose between the different production houses for the final animation. All told, thousands of hours of painstaking work behind the scenes for which the production animators will spend the next year making it come to life.

Amazingly, he got most of his funding based on his trailer pre-view, which was so polished I think the story is the distributors thought it was an already complete piece and when they found out it wasn’t, helped him find financial backing.

Afterward I bought his book, stood in line, and got my copy signed.  Miwha and the daughter who will major in art also enjoyed the presentation, even though they can’t understand French and could barely understand the English translator.   We were all quite enamored with the artist and his film is going to really be beautiful when it is finished.  I believe he said Sony Pictures might be interested in U.S. distribution, so let’s cross our fingers!

Always, I am struck by how  adoptees have dealt with this thing that happened to them.  And by the time they get to my age they have mellowed a bit and want to purge this out of their system.  Jung said his cartoons kept returning to Asia but never addressed adoption.  And then, when he did address what adoption did to his identity, it kind of just took over everything, culminating in this movie.   But he said he always he wanted to keep a sense of humor.

I can identify with that.

Every day I pray to the supreme beings that I can be mellow, graceful, and have a sense of humor.

3 thoughts on “we approve”