It’s been a rough week.

I didn’t know that I had a rough week, but then I started crying during my Korean lesson because my attempts to learn Korean prepositions totally failed.  It’s just totally useless for me to learn in, beside, in front of, behind, inside, outside, next to, to the left of, and to the right of if there’s not a person showing me.  repeatedly.  I’m all alone.  It’s just words on paper.  They’re all flat.  They’re all the same.  I need to see these prepositions in action. I need someone with me all the time.  Someone who cares.  To show me like a child.  I need people.  I need relevance. It has to be real.

Mr. S. says if only I could speak as well as Jane.  Jane is doing really well these days.  In the past month they can have real conversations.

I’ve been taking on the stupid adoption industry.  I’ve been adjusting to culture shock.  I’ve been cutting myself in public all this time, and I just want to be rocked in someones arms like a baby…

And then I’m sobbing on the subway.  Koreans don’t notice this kind of thing, but I do.  I notice Koreans sobbing a lot.  In the street.  Drunken.  Held up by a friend.  Bodies racked with pain, shaking.  I’ve seen this half a dozen times.  They do notice when a lone girl is sitting at a convenience store smoking and drinking makkoli straight out of a bottle though.  I tried to buy a cup.  The clerk said, “no.”  I kept handing her more change, but she still said, “no.”  As I was leaving I noticed a lot of cups stacked up on a shelf…

I walk home with my half drunken bottle of makkoli, stopping every few feet to wipe the foam off of my foot.  I’m wearing my hello kitty slippers and blister-saving footies and one of them is foaming soap bubbles, so I have to wipe them off.  It’s foaming because my umbrella fails to cover below my knees, and the turbulence of foot against vinyl, activated by torrential rain and two inch deep puddles causes sudsing.  And here I thought I was being conservative with the soap in my high efficiency apartment washing machinette, but I guess not conservative enough.  My right foot has rabies.  I don’t understand why one sock is foaming and the other isn’t.

I’m sure Mr. S. doesn’t like Hello Kitty slippers.  We were passing a poster of Lee Hyori, Korean sex bomb, and he pointed her out.  I said she was pretty, and he said he didn’t like her.  I’m sure he likes demure librarian types, which I am not.  Neither am I any Lee Hyori.  I am a mom with saggy tits, saggy belly, and gray roots.  And a two year old has a higher vocabulary than I do.  Millions of men in the world would love a mute woman, but Mr. S. wants to converse deep into the night about the meaning of life, and I can’t even ask for a paper cup…

I unwisely purchased the folding mats, leaving me with not a whole lot.  Had lunch with an unwed mother’s group but it was so informal and without agenda that I was confused.  Then, went and joined an adoptee activist b.b.q.  Now, I’ve been to about three Korean b.b.q.’s and this one was totally different.   More like an American b.b.q. / house party.  The house was a Korean walk-up apartment.  Terraced.  On a hill.  With a crazy convoluted entry sequence, up, around a restaurant, down, turn, then up again.  Buildings juxtaposed at parallelogram angles.  Rooftops visible everywhere.  little working class store-fronts on the street, and impromptu market stalls.  Sounds of people living all around.  The subway passing by, elevated, and with bustling micro-commercial enterprises enriching the base of its overpass.  It was sweaty, dirty, and bristling with life.  Despite the low water pressure, despite the bathroom mold, and despite the cramped quarters, I want to live there.  I mention this to another house guest, native Korean film maker, about how much I love it and how boring my officetel is.  She tells me this was how she grew up, that she lives in a regular apartment block building now, and how much she misses it.

Mr. S.’s modest one-room, less than half the size of mine, is not as interesting, but on street level.  You can sit in the window and watch the old woman across the street come out of her hanoak and sit on the steps, watching the people walking by.  You can hear bird song and measure the day by the sounds outside.  Jane’s home, surrounded on one side by hanoaks and two-story townhouses on the other, is a short-cut past a school, so there are always people passing by.  There is (I think) a Jindo dog a few houses away, which anxiously awaits her passing, because she brings treats and pets him and coos in Korean to him.  She knows her neighbors, and thus knows how to manage the steady truce necessary to live so many so close.

There is nothing like this where I live.  It is sterile and too-private and I hate it.  I must move.  The closest thing I have to the Jindo is one of the two door men, who always refers to me as Jane.  Because my name is Leanne Jane Leith, he thinks my family name is Leanne, and my given name is  Jane Leith.  I much prefer Jane.  Jane prefers Young Sook.  Koreans prefer Leanne, because it sounds more foreign.  The puppet lady prefers Suki, because she says it means, “quiet one” in Chinese.  Koreans are also confused by Suki, because it sounds Japanese.  I always have to explain that my name was once Young Sook, and that the escort probably told my parents I was called Sook-a, (it is a common practice to add -a to a name, as a form of endearment, when referring to children) and they heard it as Sook-i and then spelled it Suki. A mistake, I tell them.  Ahhh…that makes sense to them then.  I am a mistake and all my names are all false.  I don’t have a name, only an invented name by someone at Wonju city hall.  Supposedly it was the most common name in Korea at that time.  The closest name I have to a real name is the one the door man uses.  Because Jane is also my adoptive mother’s middle name.  She actually tried to think of me as her own before they got me.  Later, I became the daughter they never talked about.  Because then they would have to answer questions about why I left.

All of the above makes me want to be adopted.  In Holt International’s magazine, called HI families, there was always the section called, “Some Children Wait.”  These were the children with clubbed feet, hair lips, downs syndrome, and congenital diseases which nobody in any country really wanted.  Maybe we should include abused adoptees in that section.  Still waiting.  I’m still waiting.

But let it be born of relationship and love and not shopping from a catalog.  Stranger choosing stranger, then abruptly yanking them to a new country and language.

The artist Jeong-ae and three adoptees are sitting at a coffee shop in Haewha that was opened in 1954.  We are being interviewed so she can write a play about adoptees, which will be performed by us at the annual masked dance festival each September in Andong.  She read about my story in Hankyeoreh 21.  She said I was so sad and so strong, that she wanted to meet me. 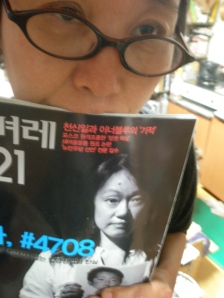 Whereas sadness and strength offend some people, in Korea it can have the opposite effect.  At least, this has been my experience.  These two words describe the Korean experience.  If you possess these two things, then all Koreans feel they can relate to you.  It might even become a pissing match – who has more sadness and more strength.  He who has suffered the most, wins…In its own way, suffering is a badge of honor, to be respected.

Seriously.  And this is one reason I do not feel so much the sacrificial lamb for telling my story.  (well, MOST days at least)  Neither do I get all offended like some adoptees, because they want to distance themselves from pity.  There IS pity.  But I would argue that this is not what pity looks like.  This is, instead, a strange form of solidarity.  And I think this is why I have been eagerly used as the poster child for adoption reform this year.  Because there is not just sadness.  Because there is also strength.

Jeong-Ae is one such person.  As Jane says, the ties to adoption are everywhere in Korea:  in every family, acknowledged or not, is the specter of adoption.  Because God damned it, people:  adoption is a feminist issue, and women are half the population.  Jane was relinquished to save her life because her mother was a battered woman.  Men hold all the rights to children, so if a battered woman leaves, she can not take her children with her.  Jeong-Ae was once “a sandbag” for her husband to punch.  Bereft of her children, she met an adoptee ten years ago and had to confront first hand what it is to lose a mother.  She is now reunited with her daughters, but has since had a special place in her heart for adoptees.

I tell her how long it took me to be sad.  I tell her people get offended by my being sad.  It’s as if my emotions pollute their space, and it’s offensive.  When maybe, just maybe they should be mad at themselves for not being able to deal with the reality of others.  I tell her I deserve to be able to cry a little.  That it’s my right.  That nobody should criticize that or take that away from me.  Jeong-Ae holds my hand and we weep together.  I cut the moment short because the other adoptee is not part of this understanding and looks uncomfortable.

She wants me to visit Chuncheon, but I am truly afraid I will never come back to Anyang…Maybe Jeong-Ae can adopt me.  She can teach me Korean, and I can help her build puppets and giant art installations, and I can live in the beautiful country side.

3 thoughts on “Some Children Wait”