As self-soothing for having to stay another year, I spent the week indulging myself.  I’m broke but very happy about it. Aside from another bad haircut experience, I must say the rest of my forays were very exciting!

My entire fashion experience all this time has been extremely frustrating.  To begin with, I had brought stuffy fancy or conservative clothing I hate to wear to Korea in anticipation of what I’d read about Korean society.    Only, come to find out I was reading about corporate culture, not popular culture.  It served me well at my first public school assignment, as it was a very conservative religious school.  But dressing up  quickly became unsustainable, simply because it became a daily battle with my inner nature.  Plus it wasn’t conservative enough and I didn’t have enough items.  Then my budget took a nose-dive and it was obvious I had no money to replace the clothes I had brought.  I also hadn’t anticipated the drastic difference in seasons and found myself by necessity being forced to buy something/anything to account for the weather.   And thus, my wardrobe consists of the cheapest clothing bought in times of emergency on impulse.  Not a good situation.

At first I was giddy about how inexpensive the clothing at Dongdaemmun (and many other places, such as Express Bus Terminal underground shopping or Gangnam underground shopping) was.  But then I realized the clothes are just CHEAP.   They are made like crap and are basically disposable and don’t fit well.  And they are everywhere, so it’s like back when I was a kid and I went to school and everyone KNEW that my mom had dressed me at K-mart’s.  It’s okay for basics that won’t last more than a season, but for anything else it should be avoided.

In the states, basics cost a lot more but they are made better – even if they are made in China, somehow the standards are better.  People select clothes with durability in mind.  There are less really stylish clothes in America.  They aren’t awful, and they aren’t anything you’ll see on a runway either.  Whereas the clothes here in Korea are a lot more stylish and trendy.  Which is great if you’re willing to spend big bucks, and many do, but lousy if you can only afford knock-offs.  There is no middle-class clothing in Korea – there are price tags for the nouveau-riche or price-tags for the working class.  I have learned the hard way that there is little benefit to buying these poor knock-offs and am sorry my wardrobe consists of so many basics that everyone knows cost 10 bucks or less.

All this time I’ve been dying to go second-hand store shopping.  For ages I wondered why I couldn’t find any.  Everywhere one goes, Koreans are immaculately dressed.  Even if working class, their clothes are never holey, frayed or dirty, covered with lint or wrinkled.  I kept asking myself, “Where does their old clothing go?”  Surely there must be second-hand stores somewhere, but the only thing I could find were VERY high-priced vintage stores and no second-hand stores.  But it turns out I just wasn’t noticing them:  they were invisible to me, but now I notice them everywhere:  little shops with store-fronts and displays that are similar to shabby boutiques, with way too much stock.  But upon closer inspection, the clothes are not current and so you walk in.  The problem with these second hand stores is the clothing is priced too high and it’s all arbitrary.   Maybe 10-15 bucks for a sweater is not so bad, but for a used sweater that is obviously not new it’s not such a great bargain.

Where DO all those clothes go?  The answer is they go into drop-box bins all over Korea.  The one by my house has a handicap symbol on it.  There are also bins by E-marts.  And probably at a lot of other places I don’t get to.  Most of the clothes go to sorting warehouses like this:

where it is bound up in bales which are sold wholesale, many of them being sent to third world countries. I’m sure this is where all the local second-hand store proprietors get their clothing as well.  These probably wouldn’t work too well for import to the U.S., because the sizes run too small. 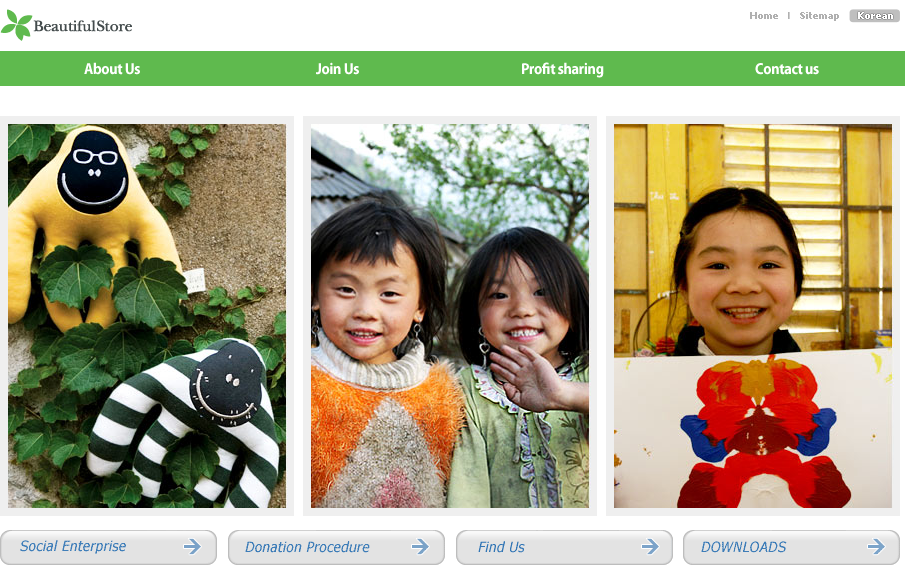 Then I read about the “Beautiful Store” and me and Joyce headed there this weekend.  I’ve been looking fruitlessly for a place where the clothes were so cheap I could select some solely for cutting up for sewing projects, and finally I’d found it!  I scored big and got some Merril boots for 3 bucks, some Toms espadrilles for 15 bucks (they go for 90 to 120 here) a sweater for 5 bucks and some sweatshirts for 3 bucks.  I will definitely go back next time I want to sew. What’s also beautiful about the Beautiful Store is that its proceeds go to charity and its staff are volunteers.  Joyce told me the newly elected mayor of Seoul was involved in its operations.   There are about 100 of these stores located all over Korea.  We went to three:  one was a “boutique” and had really high prices for designer old stock and some new stock, another was a small shop by a temple, and another was a mid-sized shop with a good selection.   A few of the shops are labeled book stores.  And a few random household goods can be found, but primarily it was clothing.

But the mother lode – the lode which would make any second hand rose drool – is Gwangjang Market.  (Jongno 5-ga, exit 12)

Back in the day when I was taking Korean classes, one of my classmates – this short hipster guy from Canada – was telling me he could find vintage clothes there for cheap, but he couldn’t tell me how to get there and I forgot about it.  Well, I remembered and headed over there and was blown away: It’s not just a second hand shop, it’s over a hundred second hand shops all on one floor.  (the second floor, to be exact, closer to the Jongro 4-ga end) The prices are about 10 bucks an item on average, so nothing you want to cut up, but there are lots and lots of vintage goods and it’s a great source for edgy urban chic:  used Doc Martins, for example.  My friend and I spent a long time in one stall which was stocked about 70% with vintage dresses from Japan.  The owner said she got new stock every week…If you live in Seoul and can avoid going on Saturday, that would be better, as it’s packed.  The amount of shoppers didn’t make much of a dent in the stock, so no need to feel competitive as there are plenty of finds for a wide variety of tastes.  In fact, there was an air of desperation about the shop-keepers who would offer discounts before you were even thinking about haggling.   And while the prices were not as cheap as I’d like, the quality and uniqueness of the items made it well worth it.  And the selection of vintage clothing was exciting.

That’s only one part of Gwangjang’s 2nd floor (I avoided the street food, as I’m done with fried Korean food, even though this is purportedly the best street food in Korea.  Another trip…):  the other part was devoted to hanbok shops.  The difference was that these hanbok shops sold remnants of their fabrics.  There must have been about forty of these shops.  So now I can source all the scraps I want to make my own pojagi before I go.  Really really exciting to me.

Just past the hanbok section (if only the Chinese girl in this video had kept going) is the fabric section.  It’s a little smaller than the hanbok section, but still quite extensive.  Unlike at Dongdaemmun, there are no vendors selling pre-orders of fabric to wholesalers by swatch selection.  And though there are a few at Dongdaemmun who sell off the roll, here everyone sold off the roll and – what’s better – is that here they sold remnants.  A lot of the fabrics were not currently in vogue, you could tell.  But a lot of them were classics and would serve anybody’s needs.  It put Joanne Fabrics to shame, at any rate, and it’s a lot more manageable and less intimidating than Dongdaemmun.

Gwangjang Market almost makes me want to live in Korea forever.  Maybe next month I’ll tackle Salvation Army and Goodwill, but they are not convenient for me to get to.

I was even inspired to do some sewing this weekend, though I was worried because Momo kept un-pinning everything and I had my hands full making sure she wasn’t going to swallow a pin.  I managed to make two t-shirts out of one and some harem pants out of a dress as well as peg some pants.  If only I had another room so I could work in peace and Momo had a cat buddy so she didn’t feel neglected…

3 thoughts on “The mother lode”