Gave my lecture about why Americans eat the way they do again today.

There’s an Open Classroom coming up, and the Korean English teacher wanted me to use this lecture for that because she found it so interesting.  I had to veto that though, as we’re also supposed to explain our teaching methods and philosophy, and our purpose here is to get the kids to speak – but this is a straight lecture with video examples, so it really wouldn’t provide much of an example of what I do or much content for discussion on teaching kids to speak.

Anyway, I really enjoy giving this presentation to the kids when Miss 이 is translating.  She’s really excited about the information, and never misses an opportunity to challenge the kids’ or increase their vocabulary or understanding.  Her class is always expectant and for the most part well behaved.

And then I get to the other class with the other teacher and, just like always, she starts the class off swapping pleasantries with the kids as one of the kids and not asserting when (if ever) they should begin to be present for learning.  As they goof off, she jokes along with them and participates in their insubordination.  And then gets frustrated that they don’t do what she asks/pleads/begs them to do when she finally decides she wants to be their teacher.  During the lecture she’s obviously often not present and therefore doesn’t pay attention, misses much of what I’m saying for interpretation, or (which drives me bat shit) assumes she knows what I”m going to say and just gives the lecture herself in Korean, rendering me totally pointless up there;  words stolen.  There’s no teeth behind any expectations to listen respectfully when it’s time to listen and speak when it’s time to speak.  The chaos and din are often so bad I just have to put the whole lesson on hold until the class notices the foreign teacher is silent.   Which I hate doing because it wastes sooo much valuable time.   But the sick thing is, is that half of the time I’m waiting for the co-teacher to stop contributing to or, by her actions, condoning the lack of respect for the teacher.  Lately I have to stop and call out her name to snap her out of her daydreaming and give me a translation.  And then two paragraphs worth of content (which the other teacher things is really valuable) is relayed to her students in about six words…Most of the class is chaos, with pods of conversations going continuously, each almost as loud as my lecture, and the teacher does either nothing about it, or admonishes them and then two minutes later is contributing to their conversations.

Today I watched in horror as the students were playing keep away with her insulated coffee cup, as she just stood limply by and let them and then tried to be cool and ignore it.  I intercepted the cup, took it, put it on the desk in front of me, and continued.   The words that come to mind are apathy and defeat.  And those aren’t to describe the students.  I’d probably steal her coffee cup if I was them, too…

It’s just such a contrast to the other teacher’s classroom, which is controlled yet exciting, and where the students have real respect for their teacher.  Now don’t get me wrong, even the weak teacher here is 1,000 times better than what went on at Baekyoung.  It was clear they wanted to control classroom management from the beginning, and I was happy to let them after last year’s trauma, but if I’d known how irritating it would be with the weak teacher, I would have insisted to take it on myself.  So every day I have this pendulum swing from a great experience to where I’m near hyperventilating out of frustration.  The contrast is so huge.

Today I walked to the cafeteria and got hit with an incredibly rank smell.  It smelled like rotten cheese, or moldy mildewed dirty socks that had been worn for weeks.   Walking past everyone’s lunch trays, it didn’t appear so bad.  Dishing up, I was still wondering where the rank smell was coming from and then, at the end of the line I got ladled into my tray the source – the soup. 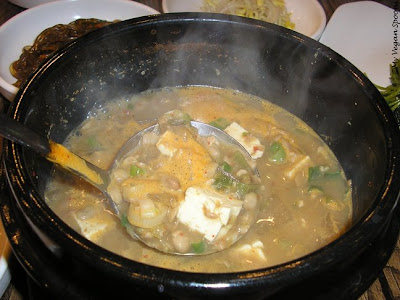 I remember sniffing it and making a face and everyone laughing.  Turns out it’s called Chung Gook Jang, and it’s fermented soy bean stew.   I told them it reminded me of natto, and they said it was similar.  I was told this is a Korean specialty and very delicious.  Anyway, I couldn’t eat it.  The smell you can sort of – almost – get used to when you’re surrounded by it, but it was just too thick with flavor, texture, and salt for my tastes.

The lunch ladies get a big kick out of my foreign reactions to their food and I’m always the entertainment for the evening.  But one in particular always worries I won’t eat enough, so if there’s something I don’t like, she’ll show up at my seat with a serving of something extra of what I do like.  The jury wasn’t even out on the Chung Gook Jang, and she was already there with extra meat patties.  So cute.  I love the lunch ladies.  The weird thing is they’re probably my age and so much more matronly than I am.   I guess I’m still in adoptee mode because I often wonder if I would have been them had I stayed here.  They have good humor and are kind.  Worse fates could have happened, for sure.

My head feels like the size of Charlie Brown’s.  Normally I love getting sick because I have no appetite and I love that not being hungry needing food being vapor feeling.  But for some reason I’m buying lots of expensive fruit and filling up on it the entire time I’m home.  Must be vitamin deficiency or something.   I haven’t had any tylenol or vitamins or any medical attention since I’ve gotten here.  It’s so weird how I hit the pharmacy several times in Thailand but never here.  I think the language and the judgement here just feels like a beating, so I avoid it to a stupid degree.

11 thoughts on “just another day”