This photo is all I have.  This stolen photo that I’m not supposed to have.  Because if I’d asked for it, they wouldn’t have given it to me.  It only exists by accident.  They only showed it to me because I had a film crew with me and they so badly wanted to disprove my assertion that the girl might be a TWIN…and then balked when I proposed we could still be sisters.  How many similar photos are kept out of reach of other adoptees?  How many severed relationships are kept across the room from each other in the Holt archives?

And they said they have nothing to hide…it’s more that they are afraid of what we will find. 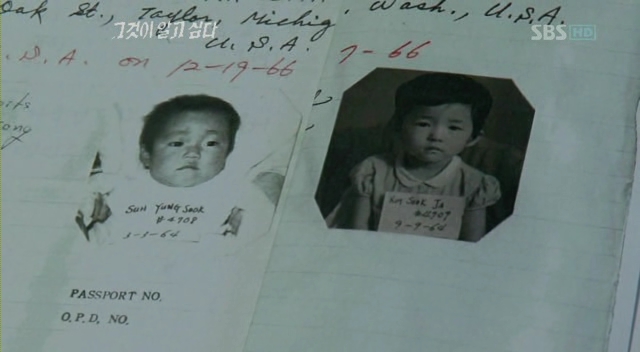 Two girls abandoned on the same day, in the same location, probably at the same time, and recorded on a document usually only reserved for one.  Two girls with consecutive orphan numbers sent to the same orphanage handled by the same adoption agency. Our birthdays written on our chests the day we were photo cataloged at intake is  exactly 6 months 6 days apart.

We couldn’t possibly be siblings because the man who gave us fake names gave is DIFFERENT fake family names, RIGHT?

And is it just a coincidence they both have Sook in their given names?

And look at those noses, those mouths.  Radically different, right?

For the love of God, Why didn’t Holt call up that girl and say, “excuse me, but it is possible a terrible travesty has occurred and we need to check – if not for your sake then at least for the sake of the other girl?”

The people at HOLT only care about themselves.  This is no humanitarian organization.  They are monsters.

5 thoughts on “This photo”