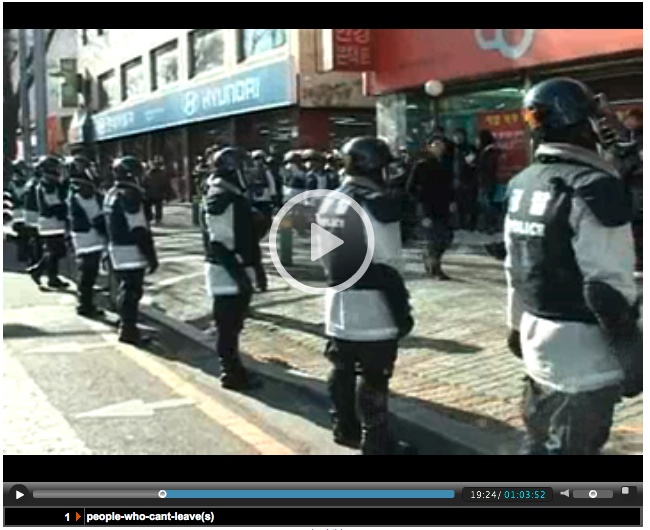 Here’s a documentary about the Yongsan-4 tragedy in Seoul, where 5 protesters lost their lives fighting for their rights to receive just compensation for their forced evictions. (the above is just a screen shot – click on the photo to get to the streaming video page, as it would not embed into wordpress properly) Thanks, Joyce, for the link!

It’s kind of the Korean equivalent to Harlan County, U.S.A.  where citizens band together to fight exploitation and corruption at the hand of hired thugs – yet the outcome was not a positive one.

Protesting in Korea is serious business, and people die.  Despite being a democracy for over twenty years now, the monied elite who really control things remain the power behind government officials.

I was reading that even despite the overthrow of dictatorships and the introduction of free and direct elections, the president is immune from criminal prosecution while in office, for example.

Yongsan was also a neighborhood I was going to check out.  Well, my new neighborhood is good for another two years before this happens there.  But really, it is also part of the master plan to heavily develop the areas surrounding the Yongsan U.S. military base (a huge chunk of prime real estate) that is closing in 2012.  The sheer scale of mass redevelopment is mind-numbing.

I, of course, will leave because I’m a privileged foreigner who can fall back on her English.  But my new neighbors, what will become of them?  Hopefully, the bad press from what happened at Yongsan-sa-ga will at least cause the developers to provide some equitable compensation – but still, with all the demolition of low income housing, where will all these people go?

One thought on “People Who cannot Leave”