Just as an example of what I’m doing:

Look for crazy-quilt neighborhoods, (how long does it take to learn how NOT to get lost?)  such as the one below: 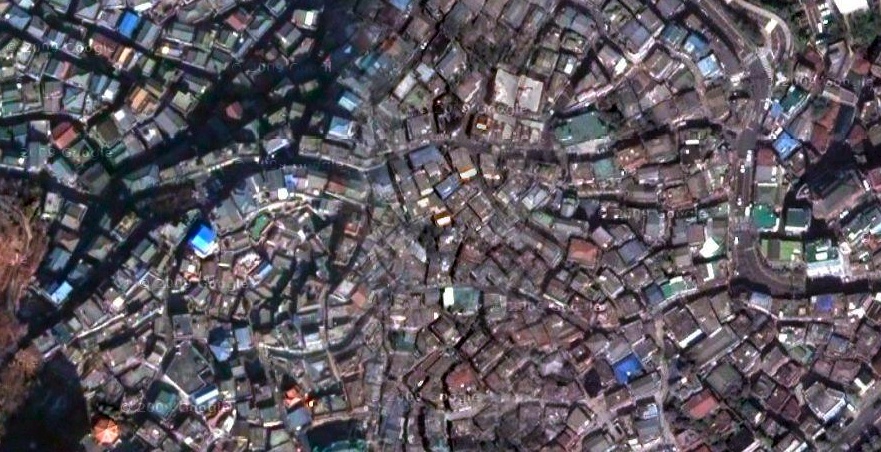 Then, I look at the terrain map: 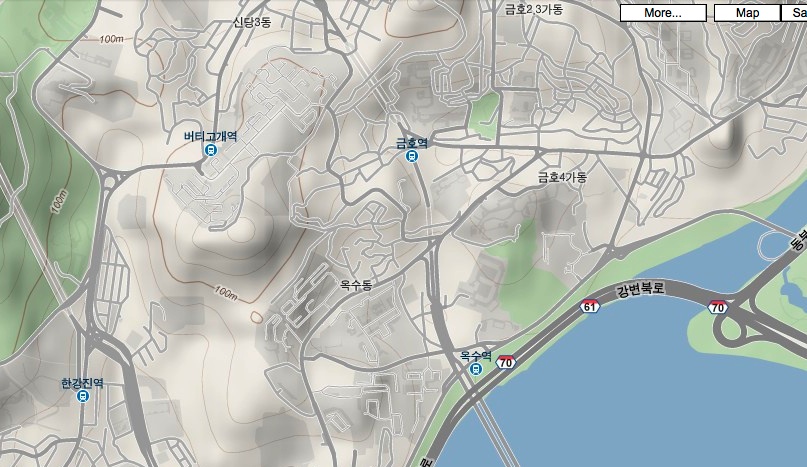 Then I switch to street map (notice the areas with fine grain housing appear blank): 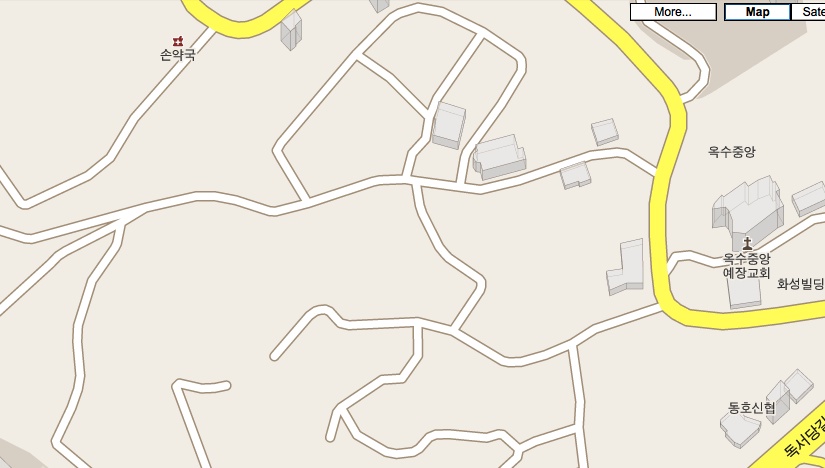 Then zoom out until the neighborhood (dong) name shows up:

Then I look for the nearest train line and locate it on the subway map: 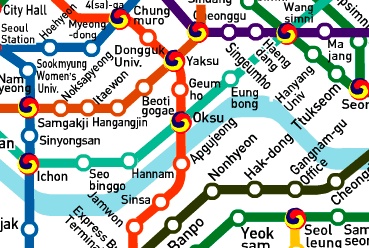 Then google everything about that neighborhood.  Kind of fun, but also exhausting.

Unfortunately, Oksu residents are being pushed out of their homes for redevelopment right now…

Amazingly, I have also read about some shanty towns that have become so permanent that developers have to also relocate and compensate the residents.  I would like to visit one of them, to see if they are just eccentric and organic structures, since their owners care and attention for them probably grew over time, or if they never evolved and remain slums and are now derelict.  Probably a little of both, depending on the fortune of the resident – but the article (damn – why didn’t I save it?) said most of the residents have been there for decades.  The developers, of course, don’t want to pay for relocation of squatters, but the city feels they are victims of speculation, so that’s an encouraging stance for the city government to take.

It’s also probably wise of the city, because with the growing population of homeless and shrinking coffers for social services, it makes sense to allow people to build shelters on unused property in slum areas.  But, this might have the unsavory effect of causing property owners to maintain their holdings better in the future, which would be a loss for struggling people.

So this search for character is something I must do.  But I wouldn’t encourage others to do this, because I know that it’s more romantic than anything and most people don’t really want the reality, which is:  a long long hike to the nearest public transport, up and down hills, past potentially bad areas, possibly the smell of raw sewage, the smell of garbage, regular cleaning of the bathroom walls (and anything else molding – which happens A LOT in Korea) and no E-mart one-stop shopping.

Fortunately for me, I’m used to most of the above and it doesn’t bother me one bit. I’m the opposite of high maintenance – as long as I have internet and can blog to my family, then that’s all I care about!  My only problem, once again, is the language issue.

IF I find some place adequate, then maybe I can entertain Korean lessons again.  But really, I have no family here, no personal relationships here, and the amount I can learn in the little time I have is just too frustrating for the amount of effort and expense.  So really learning Korean means finding a Korean who loves me (beit family, surrogate family, lover, you-name-it)  but in all liklihood, it’s pointless to learn anything beyond survival Korean.  But, if I move into a place such as this, then most definitely I’ll need to learn enough to get by.